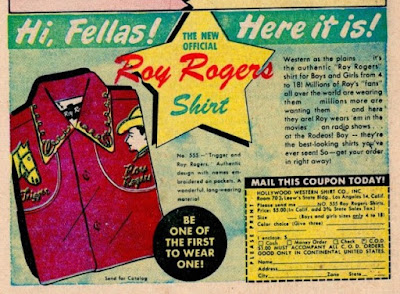 Posted by Booksteve at 11:46 PM No comments: 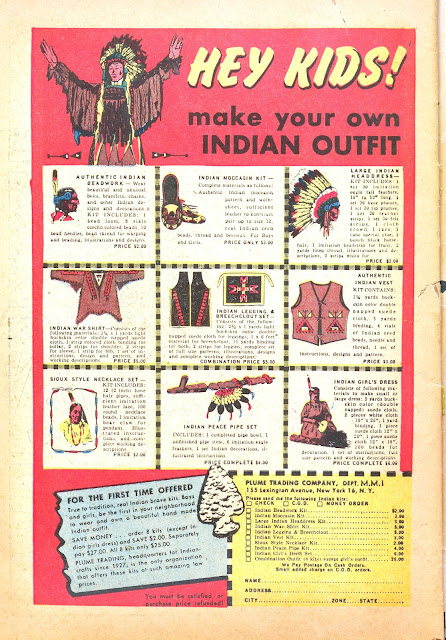 Kids in the fifties didn't just want to be cowboys. For all the misinformation in movies and TV, the Native Americans still fascinated youngsters everywhere.

Posted by Booksteve at 5:02 PM No comments: 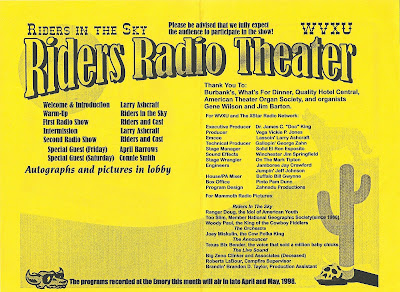 ORIGINALLY POSTED IN 2010 AT BOOKSTEVE'S LIBRARY

The only actual radio show I have ever been privileged to see live (besides the trivia shows I actually appeared on and/or hosted or Convention podcasts) was RIDERS RADIO THEATER. On February 13th, 1998, friend and former employee Ginny (still a Facebook bud today) got tickets for my wife, myself and 16 month old bookdave to accompany her to a taping of two episodes of RIDERS RADIO THEATER, the syndicated modern day musical comedy adventure series starring the western retro group Riders in the Sky.

The taping was at Cincinnati's venerable Emery Theater. That was my final visit to the great old, vintage theater where I had spent many a Sunday afternoon in the seventies falling in love with the likes of Fred Astaire, Cary Grant, Katherine Hepburn and Claudette Colbert in their classic film revival series.

The series was put on by WVXU, the now legendary college station here which was also where I made my radio debut in 1980. That debut was on the weekly Trivia episode of LIVELINE, a talk show hosted by Larry Ashcraft which is now recognized as the city's first modern day talk radio program.

Along with Jim "Doc" King, the man whose weekly Friday night radio presentations of classic OTR programs stoked my interest there in the late seventies, Larry was one of the folks behind the Riders show. In fact, early on he had offered me passes to see it but for some reason, I had never taken him up on it. By the time we did see it, the series had been running for nearly a decade.

Larry, who passed away in 2000, was an interesting character. He was a large, friendly man highly respected for many years in the field of amateur ham radio. In the 1960's, however, he had served two stints in Vietnam and was reportedly involved in attempts to clear out the village of My Lai before the legendary massacre there. He was later an interpreter to President Johnson. He had attended Xavier University in the mid-seventies after that already eventful life and volunteered for the fledgeling radio station there. Eventually he would serve as news director, development director, program host and director of community relations and special projects...including RIDERS RADIO THEATER. (The first day we met, he offered to drive me home and during the trip became quite inappropriate--especially considering we had just met-- but that's another story entirely. After that, though, I took the bus when I was on his show).

On the night of the shows, we had good seats only a few rows back from the stage. David had grown up hearing the series in the car and around the house. It consisted of Ranger Doug ("The idol of American Youth"), Too Slim, Woody Paul, Joey the Cow Polka King and Texas Bix Bender ("the voice that sold a million baby chicks over border radio.") They sang like the Sons of the Pioneers, had serial adventures that crossed cowboy heroes like Roy and Gene with MAD magazine humor and wowed radio audiences in countries around the world throughout the nineties. 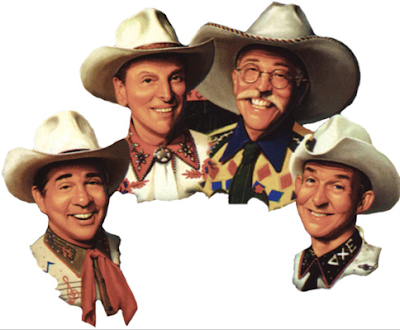 The stage was set up as if for a play only with microphones at the footlights. There were backdrops and scenery and costumes all around and yet most of the show other than the musical parts was done like the radio broadcast it was. At one point during the second taping, Ranger Doug was alone at center stage playing a soft guitar and singing when suddenly young bookdave--who had been drifting off to sleep a bit earlier--joined in. The acoustics being what they were, his surprisingly melodic harmony attracted the attention of the audience, many of whom looked our way as we tried to quiet him down. Ranger Doug glanced down his big toothy smile and nodded as if to say, "Let him sing," so we did. Sadly, when the episode aired a month or two later you couldn't hear the slightest trace of the boy in the song. Sigh.

Posted by Booksteve at 2:44 PM No comments: 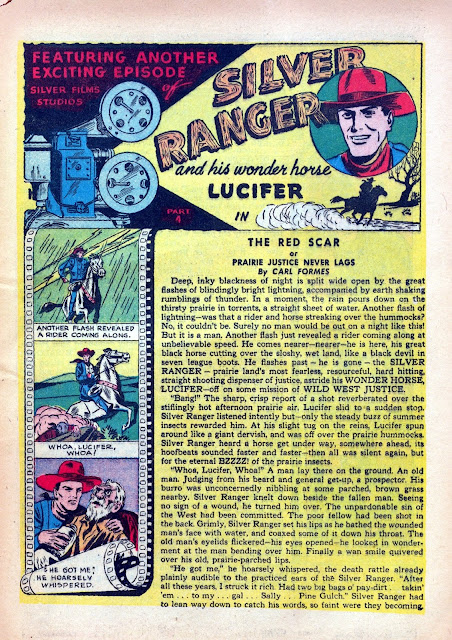 Ranger? Silver? Wonder Horse? You don't think they were attempting to make you think of anyone ELSE do you? 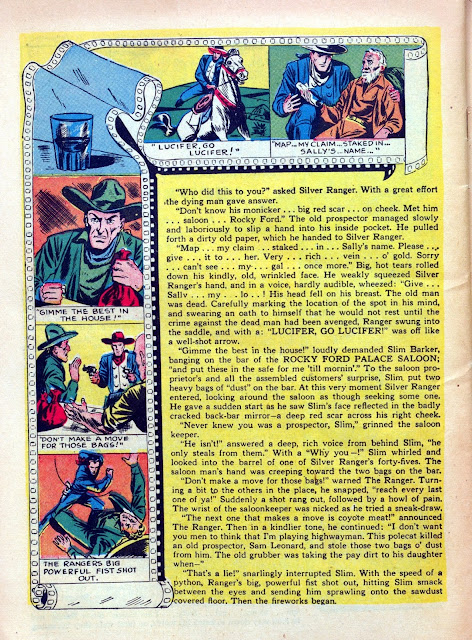 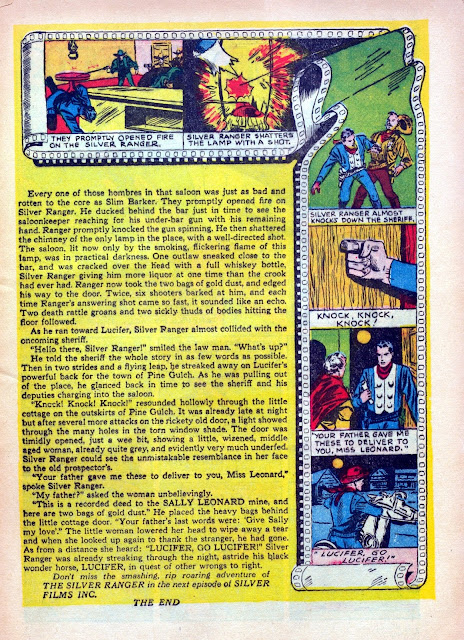 Posted by Booksteve at 6:17 PM No comments: 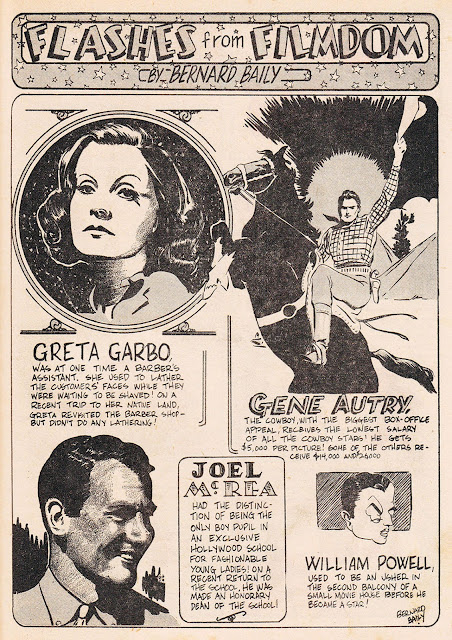 Posted by Booksteve at 9:30 AM No comments:

Since this blog is a celebration of the myths of the American Western and its cowboy heroes, it's inevitable that Native Americans, Mexicans and other minorities will be mentioned from time to time in the context of movies, TV shows or books. Note that any negative aspects in their portrayal in the media of various times is historical and does not in any way reflect the opinions of this blog nor should it be taken as a good thing! But it was there at the time and to write about it or show it here, it WILL come up. Note also that Native Americans will often be referred to as "Indians." This is again not in any way a slam but simply rather the way to which they were referred for centuries.
Thank you.
Enjoy the blog!